Your MRI and Liquid Helium 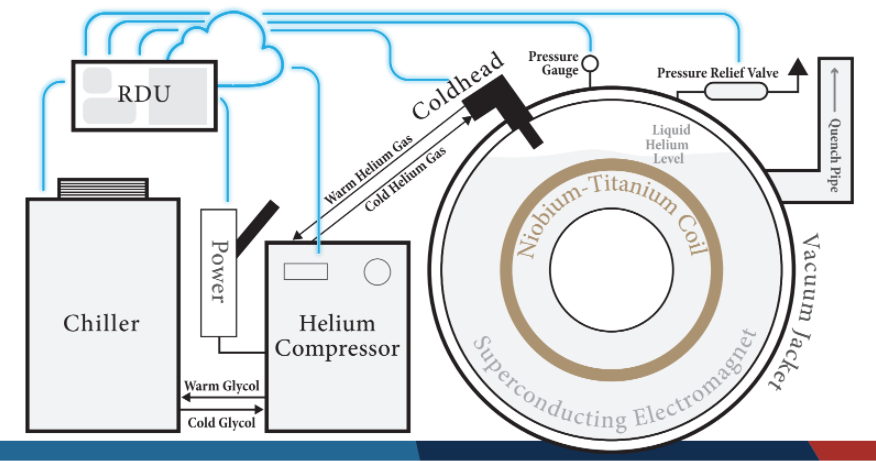 The helium that powers MRI machines is not the same as the kind that makes your voice sound like Alvin the Chipmunk. But you probably already knew that.

Liquid Helium, as opposed to a gas, is used as a cryogenic refrigerant. In this form, it has the ability to cool things down to below 450 degrees Fahrenheit, making it the most powerful and stable refrigerant on earth.

You may be aware of the helium shortage that is plaguing the U.S. This shortage is serious businesses when it comes to liquid helium and your MRI. According to a U.S. Geological Survey, cryogenics is a major use of helium in the country and there is no current substitute for these applications.

As a stepping stone to understanding this issue and how we can curtail its effects for MRI operations, let’s start with the basics:

How does the relationship between MRI machines and liquid helium work?

Let’s begin with a short lesson on why an MRI needs liquid helium to function properly.

Inside the MRI is a coil made up of thousands of feet of special superconductive wire called niobium titanium. In order for this coil to become superconductive it must maintain the extremely low temperature of -452.47°F (4 kelvin).

To maintain this temperature the coil is bathed in thousands of liters of liquid helium inside a large vessel.

How is liquid helium maintained within the MRI?

Liquid helium is the coldest element in the world and maintaining its liquid state is highly specialized and requires constant monitoring; boil off is an accepted and expected factor in MRI service models.

Below is a model to help illustrate this process:

When all 3 refrigeration systems are working in symbiosis, the helium will re-condense inside the MRI, thereby eliminating any potential helium loss. That is the way the system is designed to work when there are no issues, failures, or leaks that occur. Which, as you likely know from experience, is never the case.

Helium Loss in the Midst of a Shortage

OEMs generally cite an average 1,000 liters of helium is annually lost on a system. With the current shortage, the average helium prices are approximately $25+/liter.

The dollars and sense of this crisis can have a profound impact on health care providers. Understanding the symbiotic relationship between MRI systems and liquid helium is the first step to proactively protecting your company, providers, and patients from feeling the effects of this national shortage.

To learn more, check out The Top 5 Reasons You’re Losing Liquid Helium and download our guide for eliminating your helium loss altogether.